How can we help you today?

Why is my turntable is making a buzzing sound?! Print

Argh! So annoying! A humming or buzzing noise can really wreck your vinyl experience, so let's go through some troubleshooting steps to try and figure out where it's coming from.

It's important to note that some humming is a reality of analogue gear — if you're only hearing the hum when you've got the volume cranked up to 88, then it's within normal range. If you're at a more normal listening level and still getting hum, then we've got work to do!

Firstly, does the sound come through to the speakers? You can test that by turning up the volume with nothing playing, and if you hear the buzz get louder, it's carrying through to your speakers. If it doesn't get louder, it'd most likely motor rumble or something physical going on with your turntable. Jump ahead a few steps in that case.

If the sound's coming through the speakers, the next step is to figure out its origin. Try playing through your stereo from a source other than your turntable — if the problem is the same playing off your phone or a CD, the issue is somewhere else in your system. Have a look at your amplifier or the speakers themselves, and contact the manufacturer if you can't get to the bottom of the issue.

Once you've narrowed it down to the turntable, we need to figure out what kind of hum you're dealing with.

The most common noise is a grounding hum. Check out the beginning of this video for an example of the common ground hum. Pro-Ject turntables come with phono cables that have small attachment called a grounding spade, also known as a grounding fork (see the picture below), to fix this exact issue. 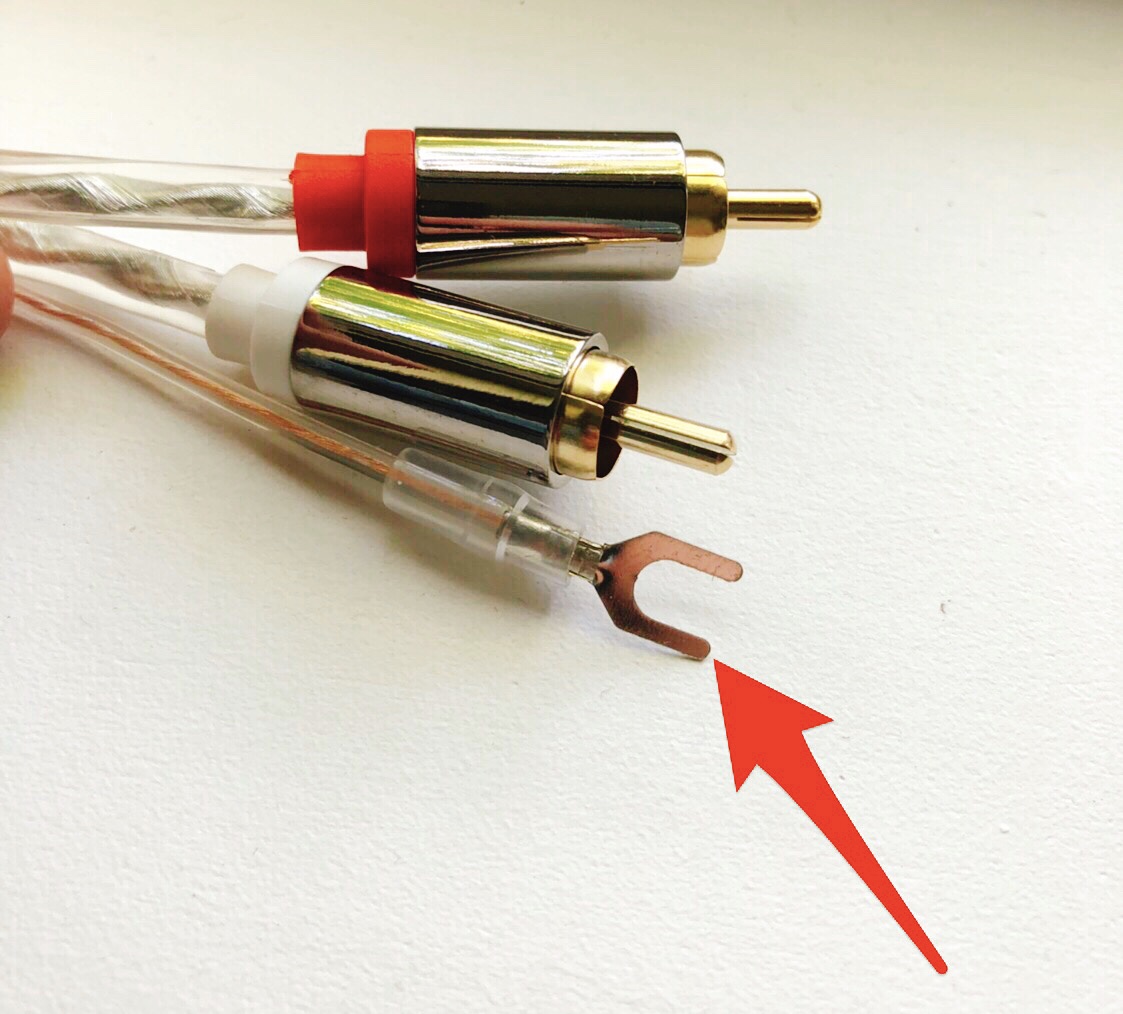 That grounding spade should be connected to the grounding pin on the turntable, which is typically between the RCA connections on Pro-Ject turntables (see picture below). 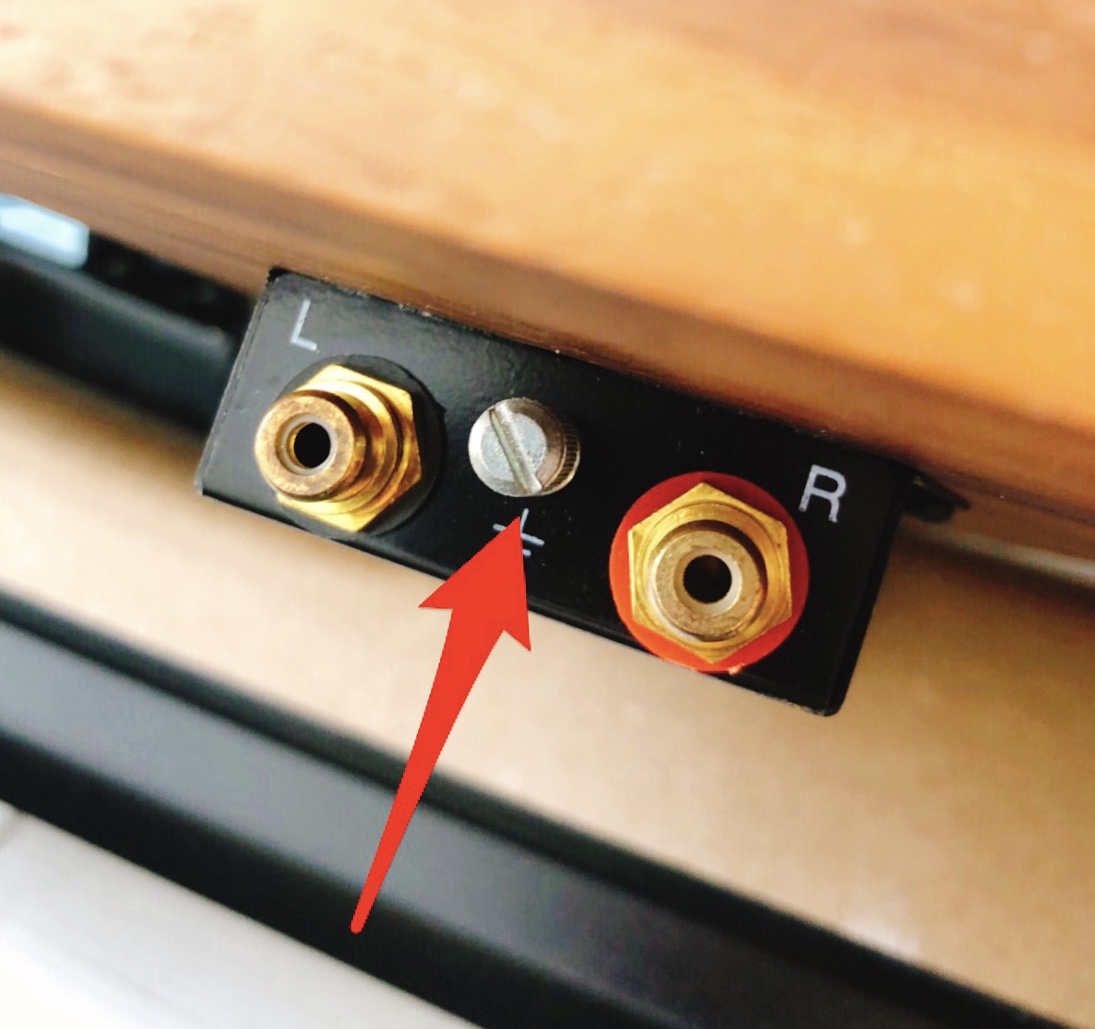 Then the other end of the phono cable will be plugged into a phono stage or an amplifier, each of which should have their own grounding pin. 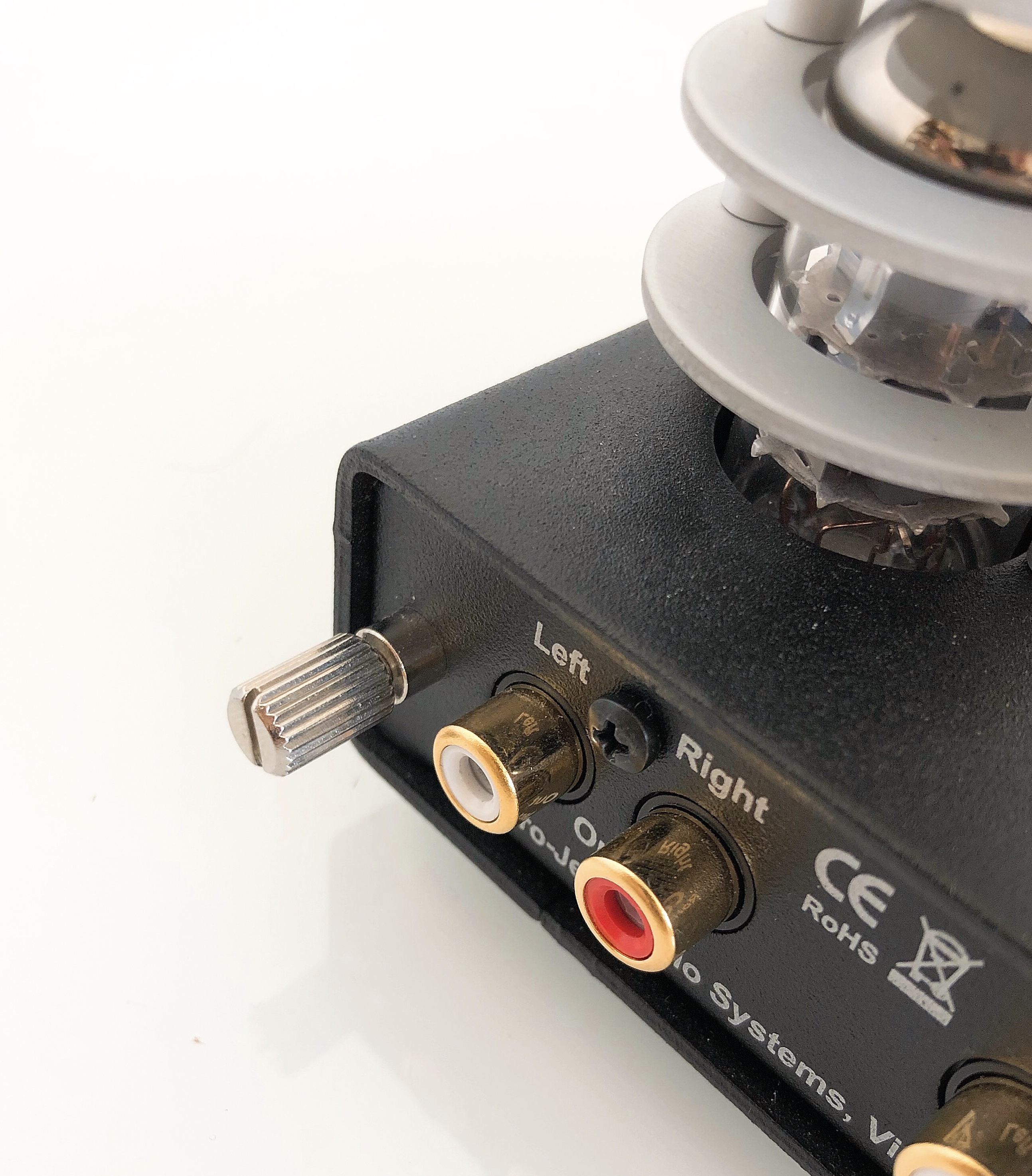 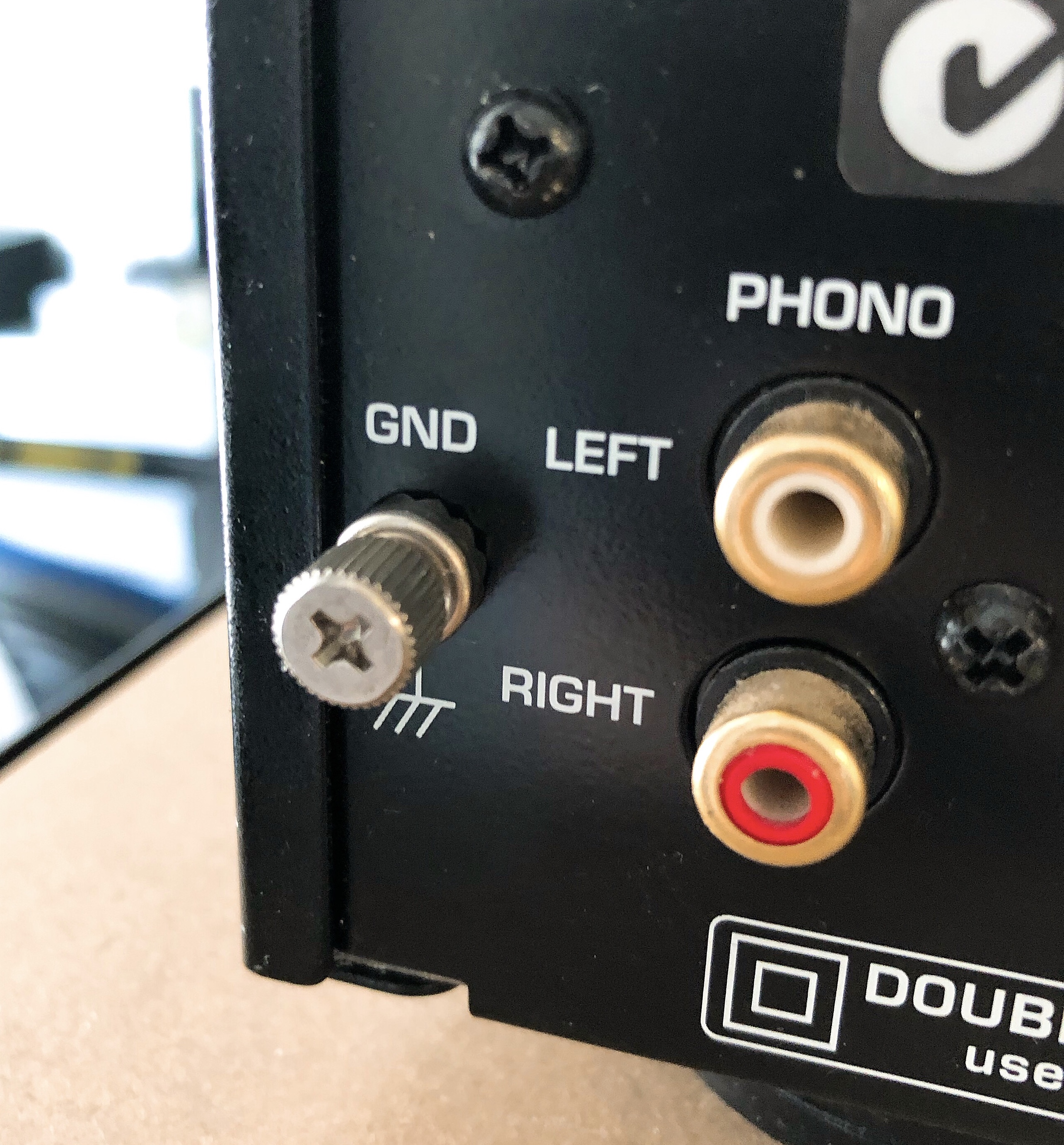 With the phono cable connected to grounding pins on both ends, the grounding hum should be sorted.

— check that all the tonearm wires (see below) are connected to your cartridge properly. Over time, they may work loose, and an open channel can cause a humming noise similar to the ground hum. Be very careful when checking tonearm wires, and they're quite delicate. If one is loose, you can slide it back onto the pin in the back of the cartridge using needle-nosed pliers and a gentle rocking motion. 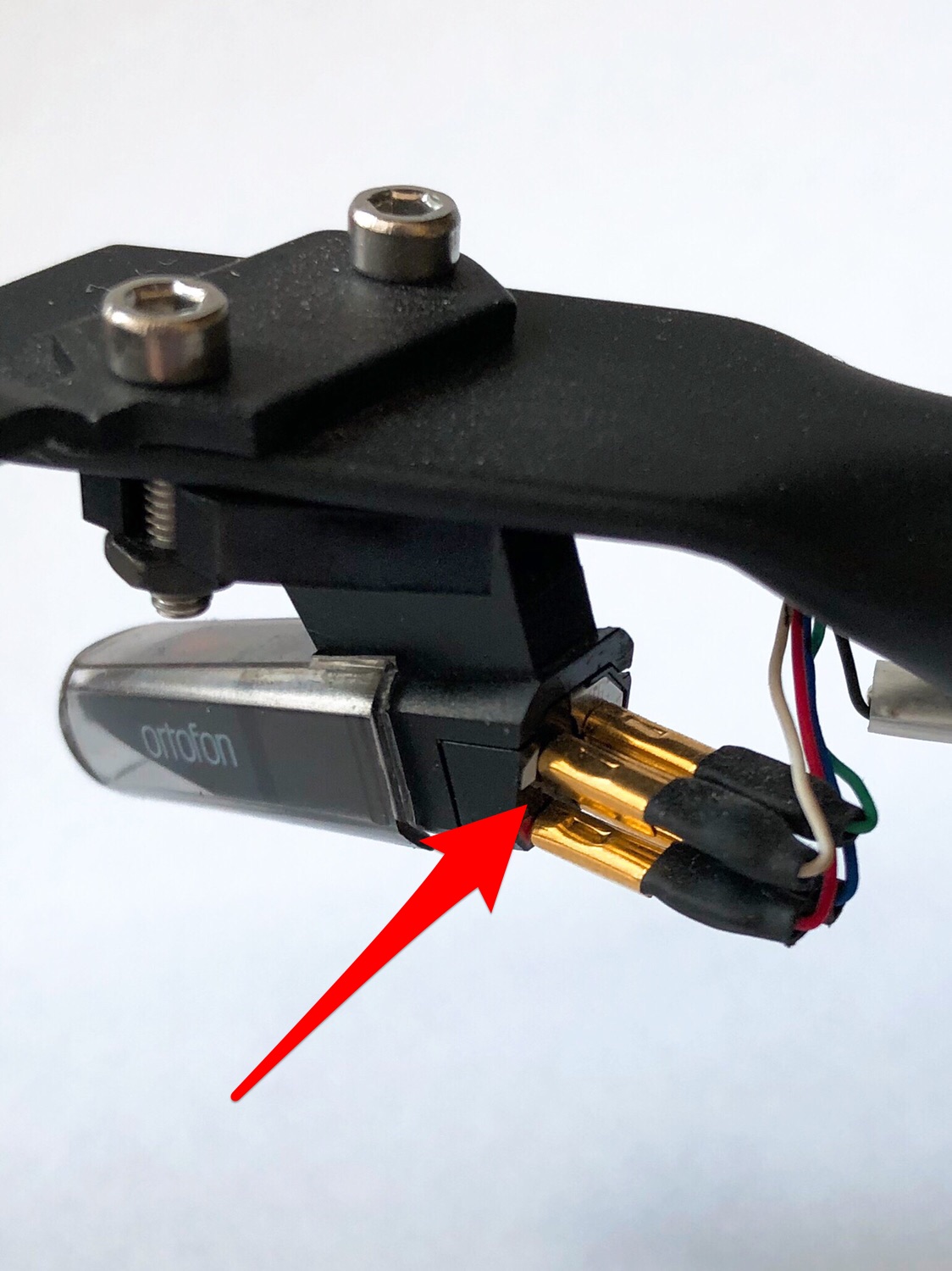 — unplug any unnecessary sources from your amplifier or powered speakers, or move the turntable further away from the amplifier. The sensitive stylus in your cartridge can pick up vibrations from other equipment, which can cause buzzing or humming sounds. If that's the issue, we recommend using the Pro-Ject Damp-It to isolate your turntable from those unwanted vibrations, also available as part of our VINYLCARE Pack.

— set the turntable up in another room. Electrical interference from nearby wiring, or household appliances like computers, fridges etc, can get picked up and added to the sound coming from your speakers. In that case, we recommend using an IsoTek IsoPlug, or one of IsoTek's power boards, to help isolate your stereo system from power noise.

— try an alternative RCA cable. If you've got a phono cable with the grounding pin, that's better, but a generic RCA cable will still help for troubleshooting. Test the connection with a new cable, and see if the sound changes.

If the buzz or hum doesn't carry through your speakers...

Then the noise is probably caused by something moving around in a way it shouldn't; most commonly, the motor is the root of that issue.

On models in the Debut and Xpression series, the motor ships secured with two transport screws in the two holes on either side of the motor (see picture below). 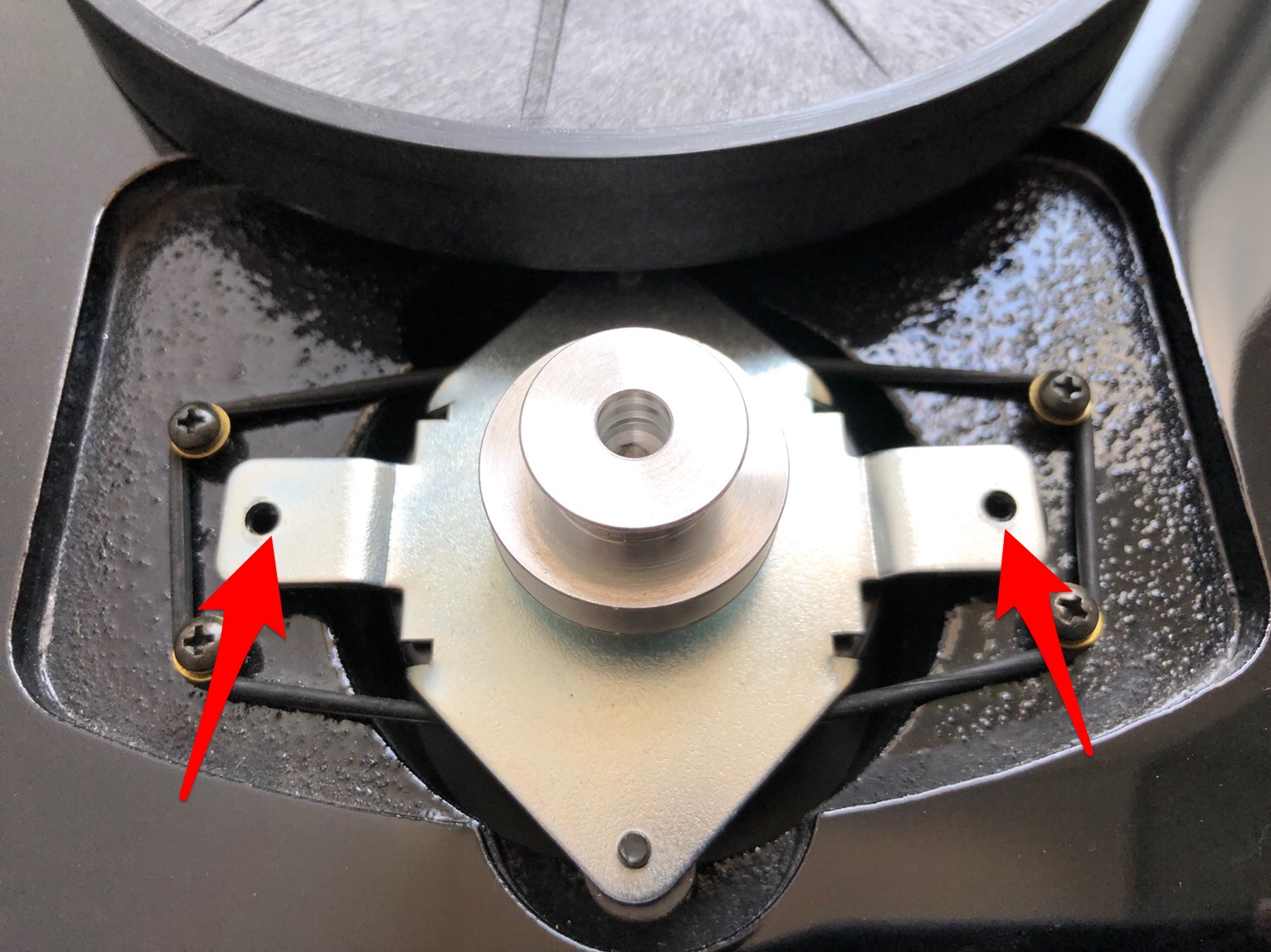 Underneath each of those 'wings', there should be a small black dome supporting the motor to help prevent its vibrations from carrying through to the rest of the turntable. If you've got those domes and the transport screws that came with the turntable, we recommend keeping those screwed in part-way to keep the motor nice and stable. No need to screw them all the way in, as that'll defeat the purpose of the domes — just enough that they keep the motor from rocking when in use. If you don't have those spare parts, or your turntable didn't come with them, you can order a Turntable Modification Kit for Debut models.

Did you find it helpful? Yes No

Send feedback
Sorry we couldn't be helpful. Help us improve this article with your feedback.